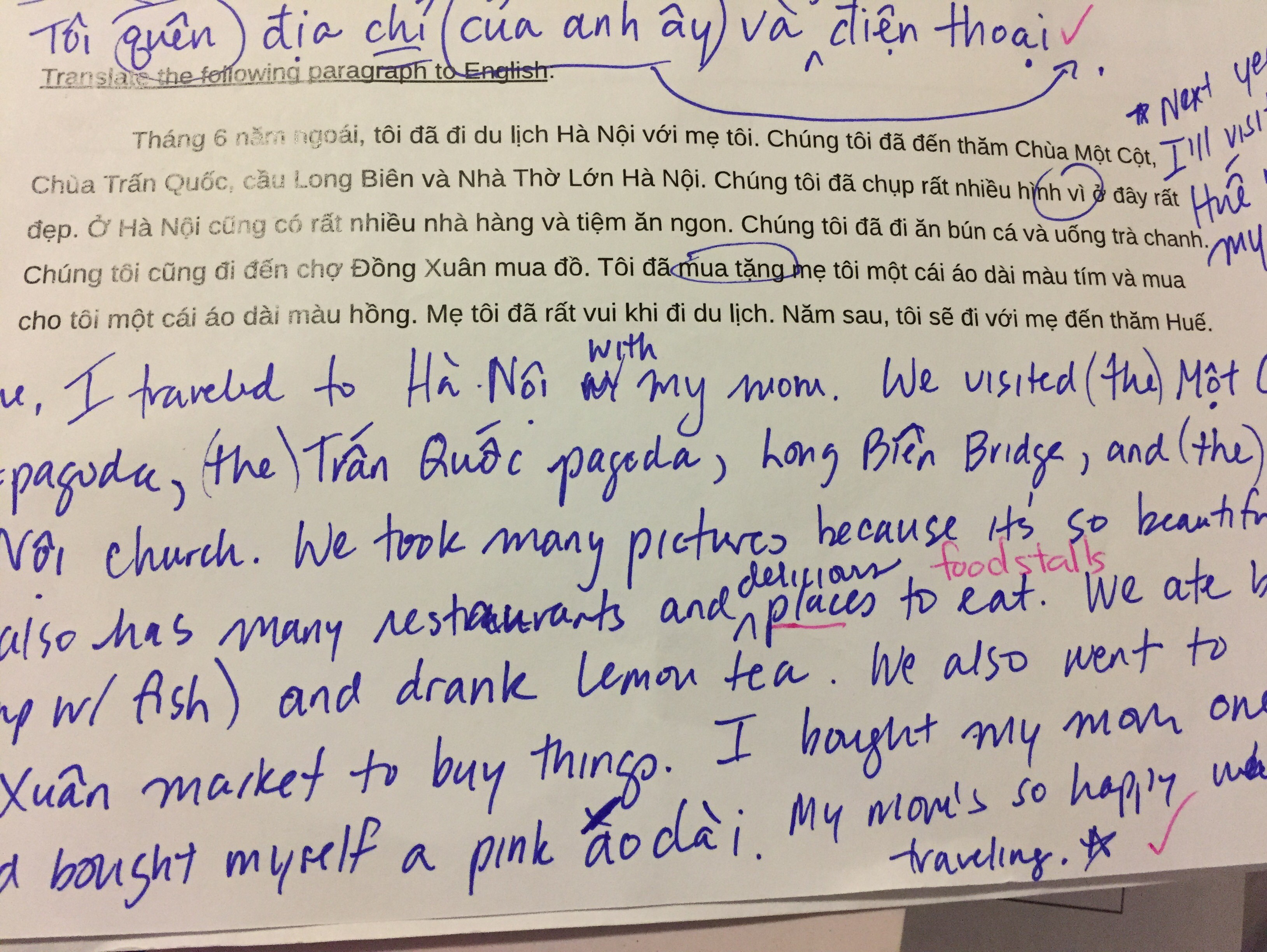 At first, I thought learning Vietnamese in a class setting would only further embarrass me. It’s gonna be full of non-Vietnamese people and they’re going to look down on me. They’ll think, “Why is she in this class?” I always felt self-conscious speaking in my mother tongue. Even worse: I couldn’t read it! Me, a reader and writer who couldn’t read or write in Vietnamese?! The shame!!! Just as shameful as using three exclamation points in one sentence.

I was glad to discover that my classmates were like me: Vietnamese-American adults who spoke the language as children, then lost it along the way. After taking level one and level two, which will, sadly, conclude in two weeks, I’ve steadily grown confident. And that’s something I want to celebrate.

I appreciate the camaraderie inside the classroom—we easily trade American jokes mixed with some typical Vietnamese craziness—but most of all, I love the cultural aspects that inevitably come from our lessons. Our teacher is young and more modern, and I’m learning how some commonly used words may seem outdated to younger Vietnamese people. One example is the word for hospital, which is bệnh viện. When I told my teacher that I’ve only used nhà thương, he kind of chuckled, saying that gave away my parents’ ages (mine are older than most of my peers’ parents). Other times, the vocabulary varies based on region, and your word choice will out you immediately.

The class remains especially enlightening because it’s giving me a taste of what my parents had learned as children. In Vietnamese schools and homes, children are taught ca dao, or folk poems. These pieces teach life lessons, and some sound as rigid as one would expect, while others are quite lovely. A common subject centers on the child’s duty to his or her parents, a notion that’s entirely absent in the American school system, where students are mostly taught to obey teachers.

But for Vietnamese people, the real teaching starts at home. I want to share one ca dao just to give you a taste of my language!

You (child) argue with us (parents) in a hundred ways you are bad.

Essentially, the poem says children who don’t listen to their parents or take their lessons to heart will turn out unruly. As someone who’s still navigating the language, I can’t quite confirm whether the author was trying to be playful . . . BUT I noticed the use of đường, which means sugar: muối and đường, salt and sugar. At the same time, đường also means road or path.

Next up: I’m attempting to translate a song I’ve been listening to non-stop: “Thành Phố Buồn.” Even my mom says this might be hard to translate correctly! Challenge accepted.