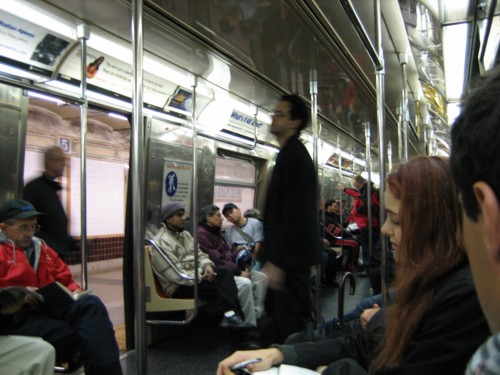 Before moving to Brooklyn, I had to stay with my sister in Washington Heights because work began before I could sign my lease. I rode the 1 train downtown. Being in a new environment, I felt my senses go haywire. I felt and saw everything that I’d normally tune out if I was in a familiar setting: personal spaces being invaded; seated people staring at crotches and asses of standing people and rap music blaring from Beats—so loud that its bass causes your arm’s hairs to tingle.

I looked around and focused on the most inconspicuous people—the ones without bright red lipstick, an Armani suit, or glistening dress shoes. I searched for the faded people; they’re the ones trying to get through the day. And then I played a game: Who belongs to whom? Not in the possessive sense, like property, but rather the sense of belonging a couple acquires after twenty years together. That belonging a baby exudes when he is balanced on the hip of a doting mother. I attempt to identify pairs and groups by the way they stand and by the clothes they wear. There are no wrong guesses in this game.

I spotted a disheveled man wearing beaten sneakers, tattered blue jeans, and a gray wrinkled nightshirt. His oily auburn hair was mussed and the bags underneath his eyes were pronounced. I immediately composed a story based on this man’s appearance. Obviously he argued with his wife last night about a boys’ night out where he spent too much money at a questionable establishment occupied by skin-clad young woman. The fight that ensued landed him on the couch instead of the bed. In the morning, he had said he was going to get coffee, but instead ended up walking past the local Dunkin Donuts. He saw the subway and mindlessly went down the stairs, finding a temporary escape. I named him Barry.

Because I had my eyes solely on this man, I failed to notice a little girl standing next to him. She wore a multicolored book bag and her hair was in a loose ponytail. She tugged Barry’s shirt. The man looked down at her and she handed him her book bag. He complied. After catching that simple movement, the story changed. His name is Jackson actually. He is a father, taking his daughter to school, perhaps at the request of the mother at the last minute because she had to go to work early. That was why he didn’t have time to get ready. Well, my initial story could still apply, but what do I know? I am just a writer. New York has always inspired me to write, and I’m glad to be surrounded by inspiration every day.

The subway near my place is far less crowded. I wouldn’t call it serene though; the train’s wheels skidding against the tracks sound like screeching babies. Or banshees. Same thing. I usually tune the noise out by thinking about writing, about my story-in-progress, about the characters who need to come alive at their own pace. Ali, a wise friend who’s finding herself in Florence (not a bad place to find yourself!), recently told me that being in New York will definitely help me develop my characters. And I can already feel that happening. I see bits of Asher, my novel’s protagonist, in the teenage boys who stay hunched over as they walk—as if they’re bracing themselves against high-speed wind. I see Saffron, Asher’s kickass lesbian friend, in the girls with cropped hairs, tights, and ankle boots. I see David, another one of Asher’s pals, in the sullen boys outside of delis who light up cigarettes at night and watch the smoke fade.

More stories are coming. I can feel it.