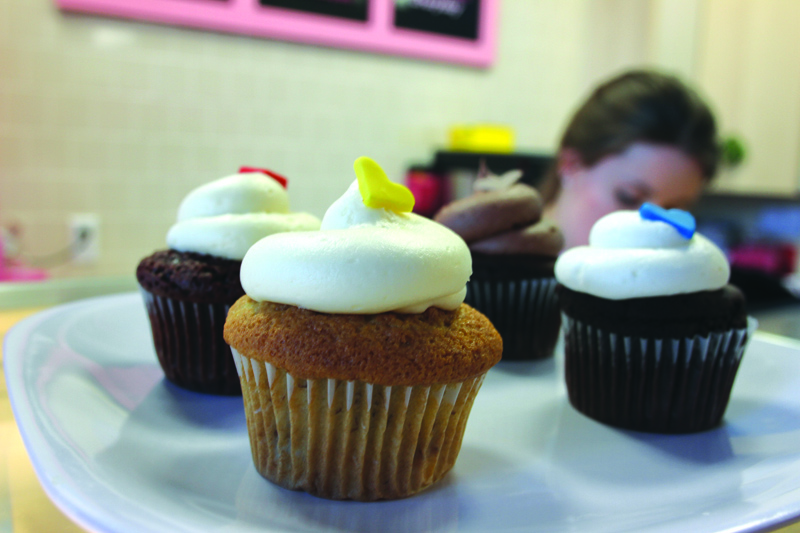 A lawsuit by a big name cupcake company in California couldn’t stop Diane Mercado and her cupcake shop from thriving in Fairfield.

In July 2011, Pink Cupcake Shack, formerly Pink Sprinkles, found itself in a lawsuit started by Sprinkles Cupcakes, a company in  Beverly Hills that dubs itself “the world’s first cupcake bakery and the progenitor of the gourmet cupcake craze.”

The lawsuit came as a surprise to Mercado.

Mercado said she registered her shop’s name with Connecticut and received approval, which then led to the opening of her store in 2009.

She then received notice from Sprinkles, saying that they had trademarked the word “sprinkles” for their company.

Mercado argued that “sprinkles” is a staple in the cupcake business, and she expressed her surprise at how a big company like Sprinkles could target her store, which is tucked away in a corner on Brick Walk Promenade.

Sprinkles, however, pursued a federal law-infringement lawsuit. As quoted in Huffington Post, the lawsuit stated that their similar names would cause “confusion” that “will damage Sprinkles and injure its reputation in the trade and with the public.”

Mercado said, “It’s a hard thing to go through; you get a lot of publicity . . .it’s just ridiculous because we’re just a little cupcake shop.”

Despite having to change the store’s name, effective on Jan. 15, Mercado believes the lawsuit brought positive effects.

When the lawsuit surfaced, news all over the country covered the drama.

Huffington Post and Associated Press picked up the topic and ran it in their online and print editions. A small boutique running against a huge company like Sprinkles caught the attention of many food fanatics and brought business to the shop.

Sprinkles had also exercised their rights to their name in previous cases.

In 2008, Sprinkles sued Sprinkled Pink Cupcake Couture, a store in Montecito, Calif. Its owner had registered the name when she got her business license in 2003.

Mercado looks back at the lawsuit as a time when she had to choose between fighting the case with the possibility of losing, or settling and changing the name to build a new future for the store.

She chose the latter, and she has yet to regret her choice.

The establishment resulted from Mercado’s longtime dream to open a store, the support and prodding from her family (but she jokes that she “dragged” her children into the business), and also a layoff from her corporate job.

Mercado said, “Sometimes people don’t venture back here, and then they’ll all of a sudden come for some reason by mistake and they’ll find us.”

Though satisfied with her location, she wishes that she could have been on Post Road, the main road for traffic.

The cupcakes, cakes and cookies sold in the shop are baked fresh everyday. Mercado arrives at the shop around 7:30 a.m. with her father Roland, who washes the dishes for her.

Each Tuesday morning, Mercado decides the flavors that will be offered to her customers for the week.

Salted caramel, cannoli cream and Gramma’s ganache are just a few flavors that have customers craving for more.

Most of the time Mercado receives cupcake flavor requests, and she said: “We try to accommodate everybody. If they care enough to call, then we’ll try to help them.”

Their busiest time is usually lunch time. Customers from Molto or Liquid Lunch, which is next door, head over to the cupcake boutique, craving a dessert for their unquenchable palette.

They enter and immediately, the aroma of freshly baked and moist mixes entice their senses, until they can’t leave without getting at least one treat.

Mothers and their children like to visit the cupcake shop on late afternoons and weekends. Mercado notes that there are a few regulars who come in to enjoy a cup of coffee and cupcake every morning.

Another great flavor is the Tagalong, a cupcake version of the Girl Scout’s cookie, with a peanut butter-based mix and peanut butter merengue drizzled on top chocolate dipped cream.

The decor of Pink Cupcake Shack reflects the slogan of the store: “Whimsical cakes and cupcakes to brighten your day.”

Mercado and her staff keep busy on the weekends by preparing cakes and treats for catered events like business meetings and parties. She delights in the fact that some people like to order cupcakes for weddings.

Students from Fairfield University and Sacred Heart University also visit the store. Pink Cupcake Shack is part of Fairfield’s StagCard program, which allows students to use their StagCard to purchase items from the store.

Mercado admits that she likes people comparing her store to Crumbs Bake Shop, a famous Manhattan-based shop founded in 2003. Crumbs has since gone on to open 39 stores throughout six states.

Even though she has already found success with Pink Cupcake Shack, Mercado said that she’s always willing to change and add to the store’s treats. As a member of the International Cake Exploration Society (ICES), she participates in baking conventions where she learns new baking techniques and shares ideas with other enthusiastic bakers.

Baking, she said, was always her “passion.” As a teenger, she worked part-time in Pacelli’s Bakery in Bridgeport, and also worked around baked goods when she was 21 years old.

Just don’t expect to see Mercado on the Food Network’s “Cupcake Wars” any time soon. Candace Nelson, one of the judges on the show, is also the owner of the company Sprinkles, which sued Mercado.

Mercado declined an invitation to appear on the show.

Mercado remains content with the state of her store and says that no plans for expansion have been made.

This Saturday Feb. 5, the cupcake boutique will host its first year anniversary at 1215 Post Road.