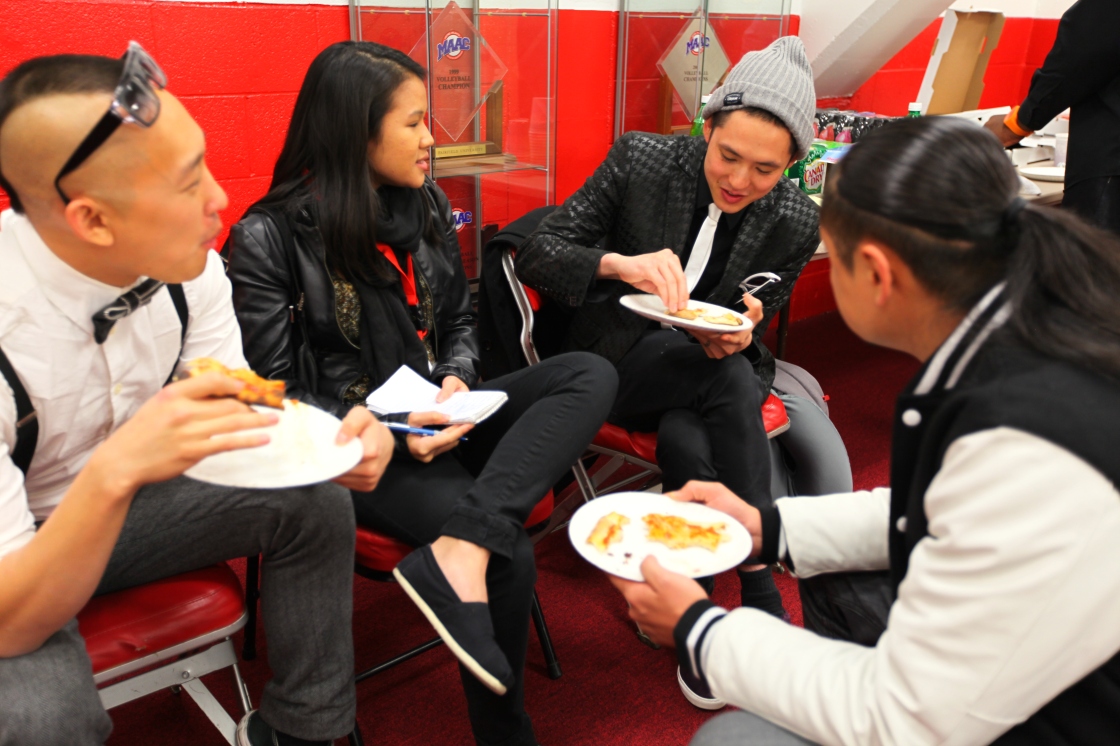 The guys of Far East Movement are the type to sit around in a circle and answer interview questions about their success while eating pizza.

The Mirror had the chance to talk with Kev Nish, Prohgress, DJ Virmin, and J-Splif – members of the L.A. hip hop group – before they were set to head on stage for last Friday’s fall concert. The Hood Internet and Hoodie Allen had already opened the show.

Nish, who was jokingly referred to as the PR guy of the group, talked about the group’s experience, from their times of obscurity to their emergence as a popular hip op group.

He mentioned how they began as artists who held no limits and who experimented with their creativity by doing mashups.

The success of their first hit “Like a G6 feat. Dev and The Cataracs,” which was on Billboard’s Top Hot 100 list for 26 weeks, “shocked” the group, according to Nish. The song was geared to college students to blast in their dorms. Never had they expected the song to be played around the world in clubs and top music radio stations.

Despite the success of their first album “Free Wired,” Nish acknowledged that the group needs new music.

“It’s time to set new music out for the people to listen to,” said Nish.

Their second album is currently untitled, but they’re shooting for a 2012 release.

FM said that they can’t wait to hear the reaction of their critics and fans.

He also noted: “We’ve been out of the studio for too long.” There’s a “new excitement,” to putting out new music, he said.

Prohgress added that they don’t feel pressured when releasing a new song, but they do get “butterflies.”

Nish joked that FM are the parents while their music are their children; they want good things to happen with their songs.

Meanwhile, since they are off-tour, the group likes to continue working on their music in the studio.

The members collaborate in songwriting and sound. “We always try to keep that fun atmosphere,” Nish said.

In the end, he concluded, “We’re not poets, we’re not scholars,” but they try their hardest to put out music that everyone will enjoy.